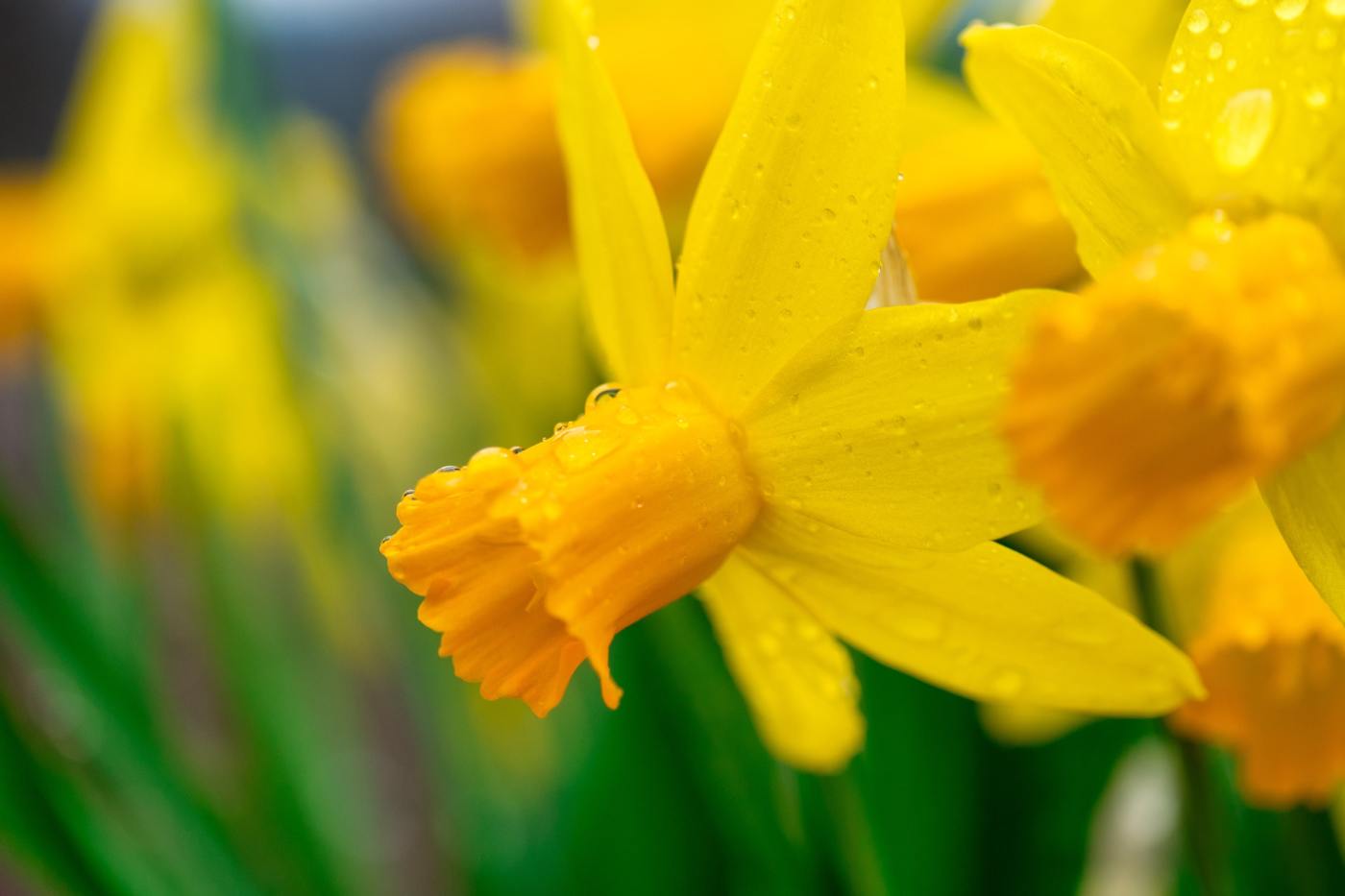 Just as it seems the grey winter days are here to stay, Mother Nature calls time and – from seemingly nowhere – intrepid little snowdrops break through the chilled soil declaring that spring is here. But, if you’re after a fanfare to announce the new season you won’t have to wait long as festoons of golden trumpets will be adorning gardens, parks and roadsides; finding their way into vases and pitchers, and brightening up homes. “With pomp and ceremony the daffodil has arrived!”

Although we know it as ‘the daffodil’ this bloom has other names: daffadowndilly, narcissus and jonquil.  And these bright trumpeters are immortalised in William Wordsworth’s famous poem – “I wondered lonely as a cloud“.

I wandered lonely as a cloud,

That floats on high o’er vales and hills,

When all at once I saw a crowd,

A host, of golden daffodils.

It is perhaps Wordsworth’s description – a host, of golden daffodils – that captures the secret of this bloom’s popularity.  Unlike a rose, it doesn’t fare well as a singleton in a vase or in the soil.  But planted abundantly or in generous clusters and there’s that promise of mantles of gold.

If you are considering growing daffodils there is enormous choice.  They are divided into 13 divisions largely based on flower form – from the familiar trumpet types and those with clustered flowers, to ones with open cups called split corona narcissi.  Some divisions are particularly known for fragrance and some for their ability to seed and spread wherever they choose (known as naturalising).  For scent and aesthetics you can’t go wrong with planting Sidmouth 7Y-R (M) bulbs from Scamps Daffodils in Falmouth – this family firm has notched up over 35 Royal Horticultural Society medals.

Colour-wise, daffodils are synonymous with a blaze of yellow, yet many blooms feature white. For fans of white daffodils, Scamps Daffodils has a timeless pure white bloom called Falmouth Bay; so named because as a seedling the daffodil gracefully turned and faced the bay.  Orange Sunrise – which is bred by Cornish enthusiast Alex Harper and subsequently grown by Scamps Daffodils – will delight lovers of spectacular colour contrasts.  The bloom perfectly mimics its name – a deep orange hue licks the tip of the corona and spills in an exquisite ombré along the trumpet, gifting a dapple of yellow to the base of pure white petals. Incredibly, there are even pink varieties on the market but there is some suggestion that true pink is yet to be achieved.

Easily the most coquettish daffodil on the market today is the Tête-à-Tête. The petite narcissus reaches a heady 20cms.  Tête-à-Tête bloom in early spring, bear up to three flowers per stem and their buttercup trumpets are slightly fluted at the mouth.  These gorgeous miniatures are an excellent choice for borders, rockeries, pots and planters.  But remember when transplanting that roots can get pot bound and might need a bit of gentle teasing.

In terms of commercial daffodil cultivating, daffodil growers have been thwarted by two bad growing years leading to bulb shortages in 2018.  A return to wetter conditions will help enthusiasts continue cultivating heritage bulbs (varieties mainly bred before 1930) alongside the more modern hybrids and new varieties. Cultivators are working towards meeting consumer desire for a more ‘natural looking’ daffodil in their homes and gardens.

Whatever their shape or size daffodils bring spring sunshine into the home.  They are not averse to sharing a vase with different flowers, particularly other spring flowers like lilacs, sweet peas, and muscari.  Aesthetically, blue, purple and red flowers contrast fabulously with daffodils but beware the urban myth – ‘daffodils are killers’.  Daffodils secrete a sap when cut, which, if absorbed by other flowers clogs their stems and disables hydration; so daffodils need to be ‘conditioned’ which means leaving them in a separate vase for six hours before joining other flowers in fresh water.

There is a feeling, however, amongst florists that cut daffodils look their most splendid without company.  Easily they are quite the most biddable flowers to arrange – simply pick a vase, pitcher or jug, add water, hold the daffodils against the container, use secateurs to cut the stems to the height of your choice (diagonally maximises water intake) and pop in the blooms. Give them a little shuffle and you have your own “glorious host, of golden daffodils”.

The best places to see daffodils in the British countryside

Wales – Coed y Bwl – Wild daffodils in an ancient ash woodland on the north-west side of the Alun Valley.

Scotland – Brodie Castle, Morray – The castle is part of the National Collection of Daffodils with over 100 different cultivators of the Lent Lily.

London – The  Royal Parks – One million daffodil bulbs are planted across eight Royal parks each year.

Please note:  This feature was written for my 2nd year Lifestyle assessment, in early 2019, as a magasine article so I have adapted it for digital.  The ‘lists’ would have been box-outs and the tips come at the end – following magasine convention.  It was aimed at ‘Period Living’   in the style of ‘image led’. (I loved researching and writing it … just saying!)

One thought on “Nothing says British springtime like a daffodil”